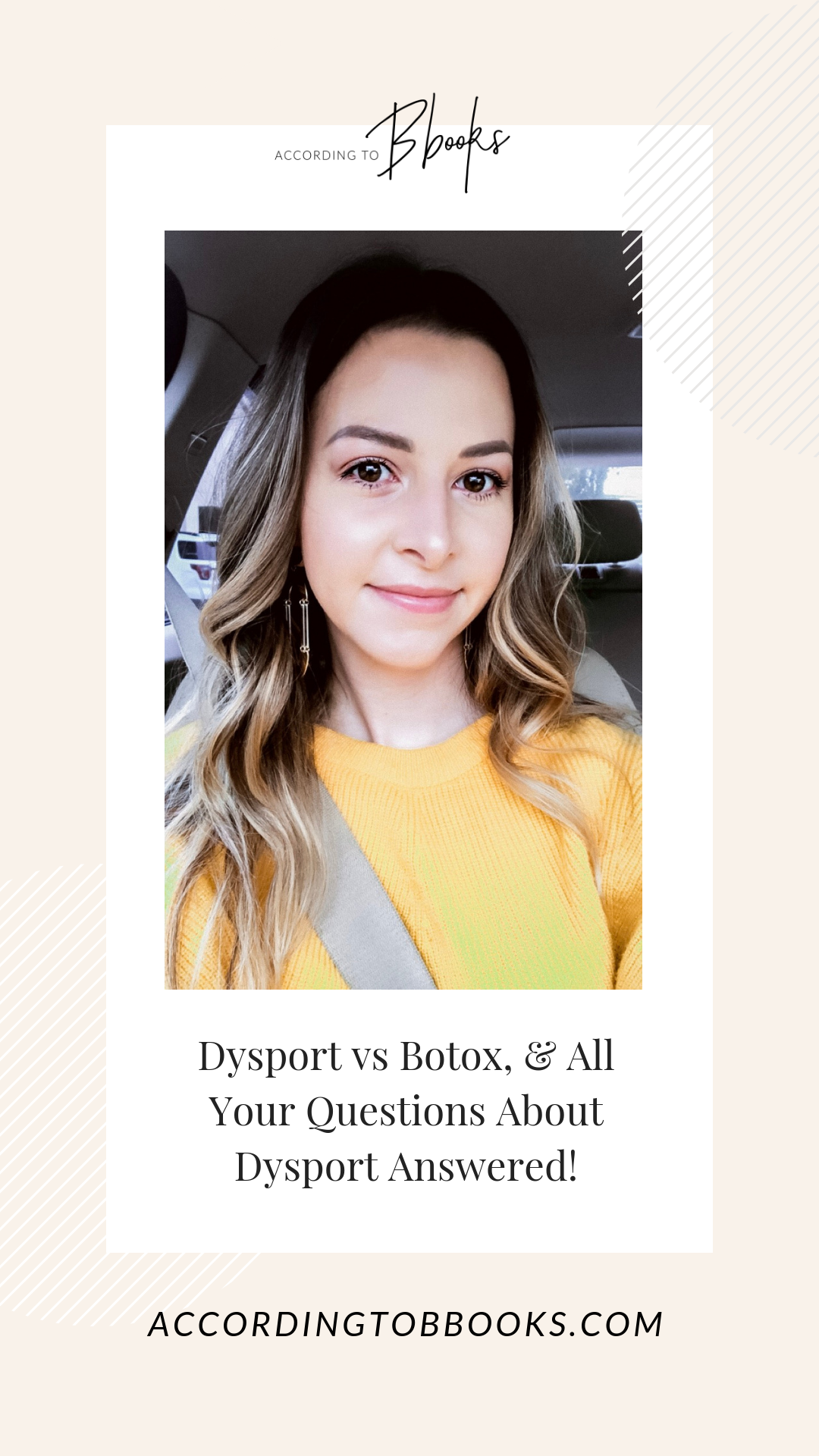 It’s no secret I’m a big fan of Dysport!! I started getting it a year ago to help prevent wrinkles on my forehead and in between my eyebrows and I LOVE the results.

I get a lot of questions about why I get Dysport (instead of Botox) and so I thought I’d do a post discussing the difference. I also answered some other frequently asked questions like how much it costs and how many units I get down below.

What’s the difference between Dysport & Botox:

After doing a bit of research online, here’s what you can find when you search for the difference between the two:

“After studying the effects of both treatments, researchers report that Dysport appears to work faster and produce longer lasting results than Botox. Whereas Botox takes 3-5 days to take effect, Dysport kicks in within 1-2 days. The effects of Dysport injections also last longer, often lasting between 6 months to a year. In contrast, the effects of Botox endure for 4 months at best.”  (Source)

According to this blog post by Zona Med Spa,

“Botox has the most accessory proteins, thus is it considered the ‘heaviest’ injectable. Next down the line is Dysport, which has a considerably lower amount of added proteins…Due to the large amount of accessory proteins Botox contains, patients may build up a tolerance to the injectable requiring the injector to increase the dose or switch to another option like Dysport or Xeomin.  Dysport further stands out…because it kicks in quicker and typically lasts longer. This leads to the benefit of saving hundreds of dollars by only having to come to the Med Spa 3 times a year as opposed to 4-5 times with Botox and Xeomin.  For this reason, we at ZONA primarily inject Dysport. The last major difference between the neuromodulators is the amount of units needed. About 20 units of Botox and Xeomin is equivalent to 50 units of Dysport. Therefore, the total price ends up being just about the same regardless of which injectable you chose at the time of treatment.”

A recap to why I get Dysport (over Botox):

How Much Does Dysport Cost?

I go to Zona Med Spa and I get their Dysport membership, which works out to $99/mo for 12 months. Here is what’s included:

Pay for the year in full and get a free Hydrafacial too! ($175 value)

A quick Google search tells me that the Dysport price averages approximately $4 to $8 per unit.  The benefit of Zona Med Spa‘s membership is that you are charged for 2 areas of your face – not by the number of units you need. Also, Michelle does free touch ups if you come back within 3 weeks and still have some movement in the areas you got injected.

How Many Units Do I Get of Dysport?

I think I asked them this once, but I honestly forget!! I don’t even pay attention to it since I’m not billed per unit lol.

How Long Does Dysport Last?

How Long Does My Appointment Take?

I’m always in and out in less than 20 minutes! Super quick and nearly painless.

Always remember… Dysport Is Like Online Dating. Everyone Does It But No One Talks About It!!!

If you have any other questions about Dysport, please feel free to ask them in the comments or shoot me a DM (which is private)!

This site uses Akismet to reduce spam. Learn how your comment data is processed.