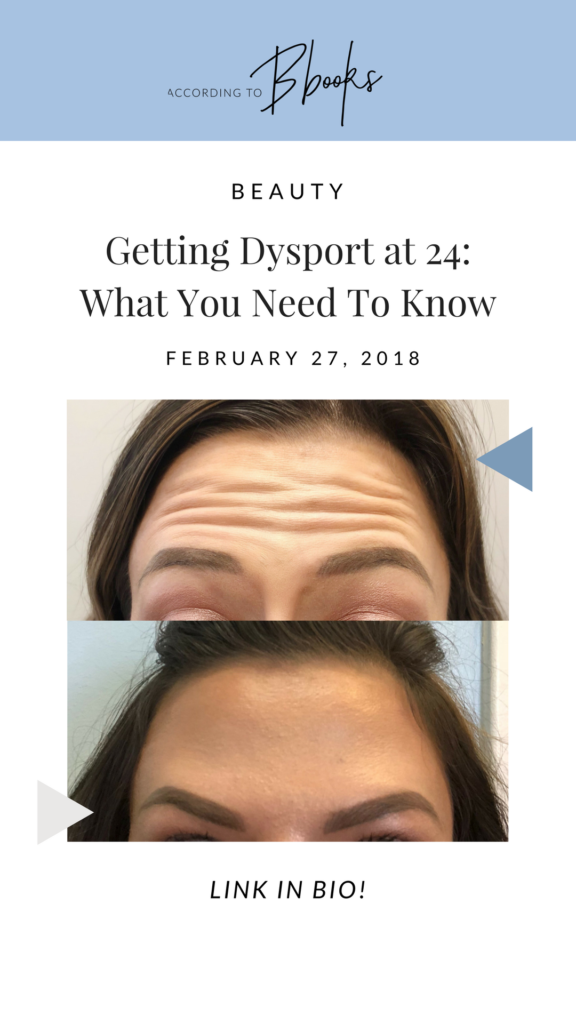 You guys… I got Botox!! Actually….I got Dysport (pronounced dis-sport), a similar “sister” to Botox that metabolizes a little differently and is commonly used in younger women to relax facial muscles. And before you guys get all freaky deaky judgy on me, here’s some background for you…

I turn 25 this year (actually in about a month, ah!) and at the beginning of the year I made it a resolution to do something to take better care of my skin as it ages. Yikes. Even writing that makes me feel old!!

I did a little research at the end of 2017 and the beginning of this year regarding what I could do to keep it young and healthy. I started following more local estheticians, med spas, and plastic surgeons on Instagram (if you know me I’m obsessed with skincare to begin with lol) to get an idea of what services were available and what they would cost. I also asked around to a few of my friends to see if they had thought about or gotten Botox.

At this point, I was still SO SCARED to do anything to my face. Coming from northern California, no one in my hometown or family really did or talked about Botox. But after getting off Accutane (which shrinks your oil glands), I felt especially dry and my skin had gotten to the point that when I would raise my eyebrows to put on my mascara, the little horizontal lines on my forehead would stick around a little longer than I remembered.

I know aging is a completely natural and beautiful thing, but I also knew that some of the women who I look up to most in beauty started getting Botox/Dysport in their early 20s. The key to Botox is to get it before you really need it, because once a wrinkle does form, it’ll only get deeper and deeper!

When Should You Start Getting It?

Although you may not have wrinkles now, that doesn’t mean you shouldn’t consider Botox or Dysport. Starting treatment before wrinkles start forming can limit their development and reduce the treatments you need later on. Consider getting Botox when you can see a faint line or wrinkle when your face is rested.

Where On Your Face Did You Get It?

My forehead and in between my eyebrows (the “elevens”). 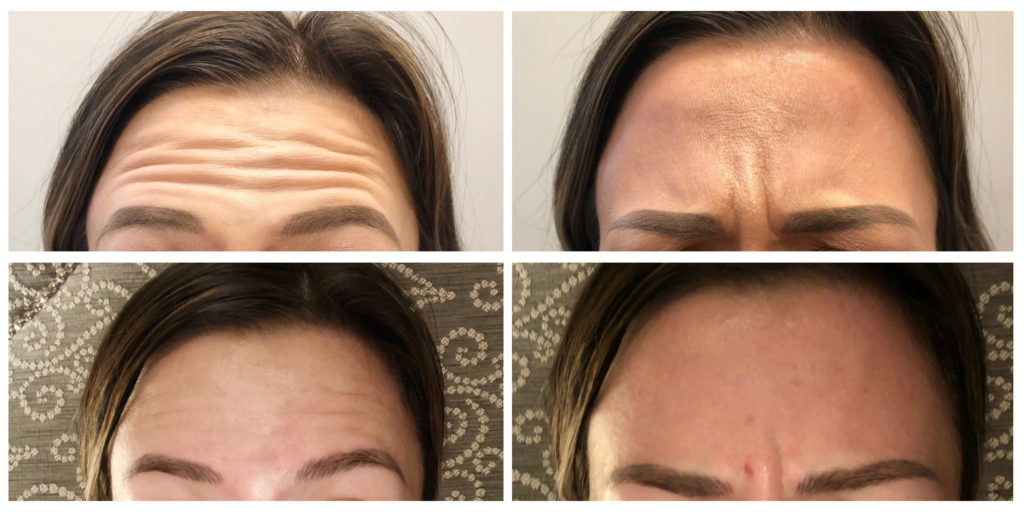 This is me before (top) and about 6 hours after (bottom). It takes about 7-10 days for the Dysport to fully “activate”, but you can see I have limited movement almost immediately.

Where Did You Go?

I booked a free consultation at Zona Med Spa in Scottsdale, AZ (who one of my girlfriend’s recommended – pssst – if you say who recommended you, you get $25 off!) so that I could ask all my questions and make sure it was right for me. They sat me down in a chair, had me fill out a bunch of paperwork, and I basically voiced my skin and facial concerns to their Certified Aesthetic Injector (her name is Michele, she’s awesome).

Before I knew it, I was signing up for a membership and getting Dysport that day lol. Michele basically affirmed all of the research I had been doing online: it’s best to start early, it doesn’t hurt much, and Dysport is typically best for those in their early 20’s. 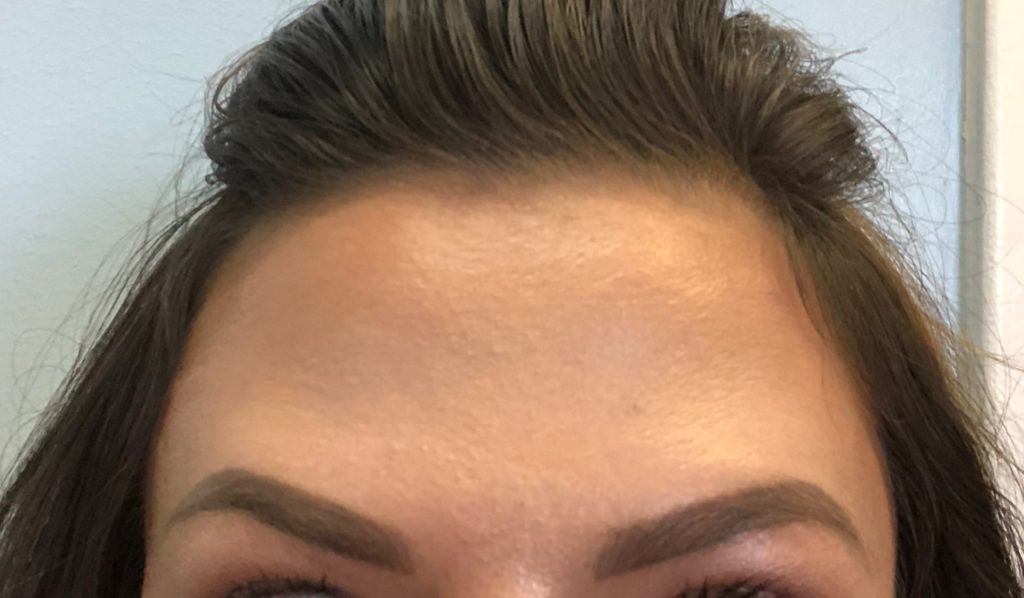 Yep. This is my after! This is me raising my eyebrows. Not a wrinkle in sight!!! lol

Nope! Hardly at all. I did have a mild headache for the next day or so, which they say is normal.

You can watch a video of me getting it done here!! The whole thing took less than a minute.

How Much Did You Get?

I actually don’t know (but a few months prior a NP told me I’d need 21 units) because with Zona Med Spa’s membership you get 2 areas of Dysport every 4 months, so you don’t pay in units.

How Much Did It Cost?

Does It Feel Any Different?

No lol. But the results aren’t instant! For the first week or so after you get it, your muscles will slowly start to “lose their strength”. After 7 days I could hardly raise my eyebrows (or furrow my brow) at all! It’s not like a lost all facial movement lol, but it was just really limited.

One huge advantage is that since Dysport relaxes your forehead muscles, I haven’t had a single stress headache since I got it! It’s amazing.

How Did Your Friends/Family React?

It’s funny because the night after I got it done, a bunch of my friends & I got together for a dinner and I  made “the big announcement” to everyone that I got Dysport. I was little nervous because I hadn’t really talked about it with many of them and I felt like it was going to be a big deal. After I told them, they all responded by saying either 1) they hadn’t noticed 2) they thought it looked good or 3) they had gotten it done themselves too lol.

I actually waited the longest to tell my mom (which I did so via text so I could send her pics of the before/after) and she said “you’re funny!” and said it looked good too. Sooo basically I was all worried about nothing, which is why I decided to share it with you guys!

Dysport Is Like Online Dating. Everyone Does It But No One Talks About It!!!

If you’re thinking about getting it done, I honestly say go for it! If you can, go to a place that does offer free consultations so that you can get a professional opinion on your needs before you throw down some money on keeping yourself young. And DON’T USE GROUPON. Go to a place that is certified, has great reviews and that you can trust. Don’t do your sister’s friends’ cousin who can do it out of your house.

This is YOUR FACE so you want QUALITY and don’t want to cut corners here to save some money. Can’t stress this enough!!

If you guys have any questions feel free to let me know! I’m an open book 🙂